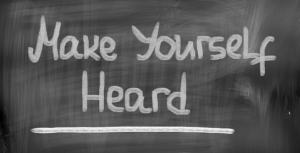 Martin Library was proud to host the second in a series of Teen Town Hall discussions on Wednesday, March 14th, 2018. This Town Hall empowered teens to find their voice and use it to make a positive difference in their community and the world.

The panel discussed the resources for civic and social engagement available to teens in York County and considered the ways in which teens can take the lead in engaging with their community. They also addressed keeping the conversations civil.

The community panelists, Jamiel Alexander, Sharee McFadden and  Edquina Washington spoke on their experiences as community activists, leaders and change agents in the community. They each addressed their personal history and what issues most impelled them to speak up. The teen panelists, Emma Poff and Isaiah Washington also shared their stories with passion and clarity.

The event was livestreamed to three other York County Libraries locations: Guthrie Memorial Library, Dover Area Community Library, and The Arthur Hufnagel Library of Glen Rock.  Those who viewed the event from satellite locations were able to submit questions via the event comment box.

The event was also streamed live to the York Daily Record’s Facebook page and has received 1987 views to date. The York Dispatch shared Emma Poff’s viewpoint of her voice being silenced.