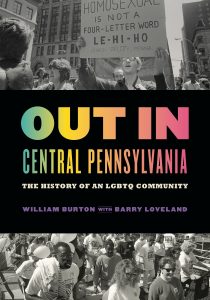 Meet the authors as they discuss and read selected passages by attending a virtual author event via Zoom on Thursday August 20 from noon to 1 PM, hosted by the State Library of Pennsylvania!

About the book: Out in Central Pennsylvania: The History of an LGBTQ Community, by William Burton with Barry Loveland was released in June 2020 by Penn State University Press.

Outside of major metropolitan areas, the fight for lesbian, gay, bisexual and transgender rights has had its own unique and rich history – one that is quite different from the national narrative set in New York and California. Out in Central Pennsylvania highlights one facet of this lesser-known but equally important story, immersing readers in the LGBTQ community building and social networking that has taken place in the small cities and towns in the heart of Pennsylvania from the 1960s to the present day. Drawing from oral histories and the archives of the LGBT Center of Central PA History Project, this book recounts the innovative ways that LGBTQ central Pennsylvanians organized to demand civil rights and to improve their quality of life in a region that often rejected them.

The book explores the early years of gay life in central Pennsylvania in the 1950’s and 1960’s with the appearance of the first gay and mixed gay/straight bars. It discusses the development of the first gay and lesbian organizations and first activists and leaders in several small cities in PA, and the beginning of campus organizing at Penn State. It chronicles efforts by Governor Milton Shapp to prohibit discrimination based on sexual orientation and gender identity for state employees and in the policies and programs of all state agencies. It is through this effort that many of the early leaders and activists came together to form the PA Rural Gay Caucus, which led to the first gay lobby days, the first statewide gay conferences and the first gay protest marches in the state outside of Philadelphia. The book covers the local response to the HIV/AIDS crisis, the work for passing local non-discrimination ordinances, the lesbian movement, the rise of Pride celebrations, providing safe space for LGBTQ youth, the transgender movement, election of local LGBTQ politicians, the development of the LGBT Center and many other topics.

Full of compelling stories of individuals seeking community and grappling with inequity, harassment, and discrimination, and featuring a distinctive trove of historical photographs, Out in Central Pennsylvania is a local story with national implications. It brings rural and small-town queer life out into the open and explores how LGBTQ identity and social advocacy networks can form outside of a large urban environment.

William Burton is the author of Out in Central Pennsylvania, and is a writer living in Provincetown, Massachusetts. He has a master’s degree in History from the University of Massachusetts and his thesis was in LGBT history.

Barry Loveland is a cofounder and chair of the LGBT Center of Central PA History Project and is retired after a 32 year career with the Pennsylvania Historical and Museum Commission. Loveland assisted the author in creating and researching material for the book’s content, and editing the manuscript.

The morning of the event, a link will be sent to you to join the authors!