Home » Library News » How to Identify and Care for Photographs

How to Identify and Care for Photographs

Identifying the type of photograph(s) that you have helps to date an image and can be key to determining the best handling and storage conditions. Some of the earliest images, daguerreotypes, ambrotypes, and tintypes are both the positive and the negative and were encased not only as a “framing” method but are critical for the preservation of the image. Daguerreotypes can be identified by a silver mirror finish where the image can be seen or not seen depending on reflection. These date from 1839 -1860s. Ambrotypes are a positive on glass with black background added in order to contrast and see the image dating from the 1850s -1860s. Tintypes, more properly known as ferrotypes, are a positive on iron and date from the 1850s to the early twentieth century. 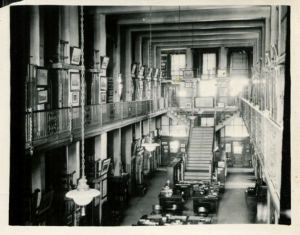 Tips for safe care and handling of photographs

The following tips will help you avoid damaging your photographs.

Recommended storage conditions for photographs is a stable temperature of 65 to 70 degrees F and 30-50% relative humidity year-round.  If lacking the above conditions, it is imperative to at least store photographs in living areas and not in attics and basements which are too dry or humid and subject to extreme temperatures. Store photographs off the floor and do not store photographs near sources of water, heat, light, direct air flow, dust, or in wooden or particleboard cabinets due to chemical off-gassing from these materials.

Look for storage materials from reputable suppliers that are listed as having passed the Photo Activity Test (PAT). Use unbuffered paper sleeves or plastic sleeves constructed of Melinex or Mylar (Polyethylene Terephthalate), polyethylene or polypropylene to house individual images. Do not use PVC. Do not use plastic sleeves if the emulsion on the photo is flaking or for glass plate negatives, as static electricity may pull the image off.  Album pages with an adhesive background are not recommended.

Store all negatives in paper sleeves to prevent trapping vapors and store these separately from prints. Segregate negatives that are deteriorating or which have funny odors, as these may affect intact negatives nearby.

Store glass plate negatives in unbuffered, 4-flap paper enclosures to avoid abrasion. Avoid plastic due to its slippery nature and the danger of dropping.

For photos mounted in acidic scrapbooks or albums, it may be damaging to remove these, and it is probably best to interleave between pages with unbuffered tissue paper. If mounted photos are already loose, you may attempt to carefully remove these and sleeve and store them separately. If in doubt, consult a conservator.

Store all sleeved photographs in lignin and acid free, buffered boxes making sure that images cannot fall over and curl if storing upright.  Ideally store all photos flat in boxes, especially those over 8” x 10”.

Digital photographs pose a unique preservation and handling challenge as files can become corrupted, overwritten, or become an obsolete file format. If you cannot print out copies of digital photographs and record information about them on the reverse, it is important to establish storage, naming, and filing systems. For example, create logically labeled folders such as Florida Vacation 2019 with sub folders and individual files named using a similar convention that allows you to keep track of images and where they belong. Avoid naming photos by default such as File01.jpg or img01.jpg or picture1, etc. Should these files become separated from their folder you may have no idea in the future what they are or when they were taken and the danger of overwriting files with the same name becomes greater.

Keeping a master copy of your photos in an unedited, uncompressed, tiff format is recommended, along with having another use copy in jpg format that you can edit. You can later make another copy from your master tiff if/as needed.  Create multiple copies of these images, especially the master tiff images, and store in various locations such as a hard drive, external hard drive, flash drive, cloud storage, etc. Storing one of your copies on CD or DVD is possible but be aware that this storage medium is becoming obsolete. Having multiple copies using the LOCKSS (Lots of Copies Keeps Stuff Safe) and keeping one untouched copy for generating copies rather than manipulating (where the file is more likely to become corrupted) is key to preservation in the digital realm.

If you desire to exhibit photographs in your home or office, it is recommended that you have a copy or scanned facsimile made of the original since the original can be damaged by light. If you must display the original, use UV filtering glass in the frame and acid-free mats and backer boards. Limit the amount of exposure time (no more than three months) and keep away from sources of light, both sunlight and artificial light (especially fluorescent). Also avoid sources of heat, moisture, and direct air flow. Do not mount photos using adhesives. Non-adhesive archival corners can be used.