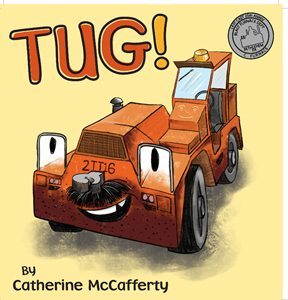 TUG! is a picture book about a tow tractor that helped steelworkers by pulling buggies at Bethlehem Steel. After the last cast is poured, TUG is left alone at the steel mill, but soon learns that no matter how much Bethlehem might change, there is always more that he can do to help.

The book will be released on November 14, 2020, as part of the Last Cast celebration* at the National Museum of Industrial History. Members of the Steelworkers Archive will help celebrate the book with a “Storytime with a Steelworker” as part of the day’s events. Children will also be able to meet the real TUG that day, as the vehicle will be on display at NMIH.

So where did the idea for the book come from? “In late March, library director Josh Berk emailed me to ask if I knew of any children’s books about Bethlehem Steel,” says author Catherine McCafferty. “When I said I didn’t, he said, ‘Maybe we write one…'”

Berk had a conversation with NMIH’s historian, Mike Piersa, who had the perfect idea for a main character. Piersa says “What makes TUG such an engaging character is that, like a person setting off on their own career, he took his skills to new places, multiple times, and made a living that earned him respect and admiration.”

TUG’s commitment to hard work is something that any young readers can take with them long after turning the last page. Berk says “if a kid goes to their first day of school after reading TUG!, they can carry with them his commitment and dedication to doing a good job, and his belief that he can do anything he puts his mind to, even if they are nervous.”

McCafferty adds “from the beginning, I felt very strongly that TUG’s story was the story of the Steel: hard work and friendship, loss and abandonment, then a renewed sense of value and purpose.”

TUG! Contributors are Mike Piersa and Catherine McCafferty.  Mike Piersa is an historian for the National Museum of Industrial History. He holds an undergraduate degree from Moravian College and a master’s degree from Lehigh University. Mike has a passion for preserving and restoring the historic equipment and unique machinery from Bethlehem Steel.  Catherine McCafferty grew up in Bethlehem at a time when the blue flames of steel production lit the night sky. She is the author of fiction and nonfiction for children, and currently works as a Youth Services librarian at the Bethlehem Area Public Library.

You may obtain a copy of TUG! at BAPL Books.